Posted on August 7, 2016 by RachFarrimond

There is little in life more disappointing than a good book that is ruined by a poor film adaptation.

My best friend is a big fan of the Night Watch series by Russian author, Sergei Lukyanenko. She tells me the books are brilliant, but I have not got around to reading them yet (I do that a lot). A few years back, the books were turned into films (Russian language) and Sarah got quite excited about it and talked me and another friend into going to see Day Watch with her. It wasn’t really a hard sell as the tickets were free. As Day Watch is the second story in the series, Sarah spent some time filling us in on the first story and the series in general so we could pick up what was going on in the film. Now, when I say she “filled us in” you have to understand that Sarah is meticulous with plot details. We were so clued in by the time we got to the cinema that we may as well have read the whole series ourselves.

So when the film that unfolded before us was nothing at all like the book … Sarah was incandescent with rage by the time the end credits rolled and she proceeded to tell us, again in detail, where the film had fallen far, far short of the books.

“They didn’t even get half of the names right!” we were told.

It is a feeling that anyone reading George R. R. Martin’s Song of Ice and Fire will no doubt understand when it comes to Game of Thrones. On that particular count, I must confess I am a watcher rather than a reader, so I’m actually quite enjoying Game of Thrones at the moment and can’t really add to that particular Book -v- Adaptation debate.

I love books and films equally, and for this reason, I have spent a little time studying both. When I was doing my A Levels, I almost accidentally found myself on the Film Studies course (I had originally wanted to take Theatre Studies, but it clashed with English on the timetable, so I went for Film instead). It turned out to be a very happy almost-accident, as the more I studied film, the more I came to appreciate and admire the craft and the techniques used to show and tell stories in that medium.

A little later, at University, I took a module on Literature in Adaptation. The Literature course joined up with the Film Studies course for this module. As a case study, we looked a Practical Magic. Sure enough, there were those who preferred the book over the film and vice versa. Interestingly, the Film students tended to prefer the book and the Literature students preferred the film.

Make of that what you will.

One of the things I want to do on this blog is look at how film/TV adaptations live up to their literary counterparts. But before I get into specific cases, I wanted to take a moment to think about why adapting books to films can be such a tricky business.

Well, for a start, there are the fans. If a film studio is interested in turning a book into a film, it will be because the book is popular and has a ready-made fan base who will flock to see the film. It also means that there is a ready-made group of critics who are poised to tear them a new one if they take liberties with their precious characters. Game of Thrones is by no means the exception when it comes to dividing audiences into love/hate categories between books and films. In fact, it is remarkably common in that sense. There is absolutely no way at all to please every single fan 100% of the time. And they will be vocal about it.

Without exception, something will be lost from the original text that somebody won’t be happy about. The studio’s job is (or should be) to take as much care as possible to preserve the integrity of the story and the characters while translating everything through the lens of a camera.

This is very difficult to do, as film, with all of its wonderful possibilities, and visual and special effects, can be quite a limiting form when it comes to storytelling. People have compared books and films to an iceberg. The film covers what is seen above the water level and the book has the 90% that is hidden beneath the waves. I find this a little unfair when you take into account how very different the process of filmmaking is from novel-writing.

When you write a novel, you have complete free rein to fill in as much back story, description of the world and inner thoughts of the characters as you like. There is no such thing as too many words when it comes to writing a novel which means you can take as much or as little time as you like to get the story across.

When it comes to film, there may be no official maximum limit on how long it should be, but good luck trying to get an audience to pay attention for much more than two and a half hours. In that time, you have to do everything a novelist would with no restriction. Granted, you can do in seconds what could take five or six pages to describe in the book, but back story and inner thoughts can be harder to achieve – just look at the Studio cut of Bladerunner. The controversial voiceover that was added to the film may have helped to explain the strange futuristic world, but it was clunky and awkward (not to mention the fact that Ridley Scott directed Harrison Ford to deliver it as a deadpan drawl) and was thankfully dropped from subsequent edits of the movie.

But before we write off films as the poor relation to books, there is no denying that films hold an unique kind of magic that is completely irresistible. As much as we can love letting our imaginations run wild as we read, it is hard to ignore the wonder of those moments playing in front of us on a big (or small) screen. Who could forget the rush of wind, the soft glow, the look of surprise and the rising music when Harry first picked up his wand in Harry Potter and the Philosopher’s Stone? Admit it, you got goose bumps.

Films are also a collective experience. You can go along to a cinema with a group of friends, experience the same story for a couple of hours and then go away talking about it for days on end. You can do this with books, but you may be waiting a while for your friend to catch up with you. My sister is still waiting for me to read I Am Pilgrim by Terry Hayes. She read it over a year ago (sorry, sis).

I am not going to argue that there isn’t such a thing as a bad adaptation, but I do think that all things considered, they are rarer than we allow. 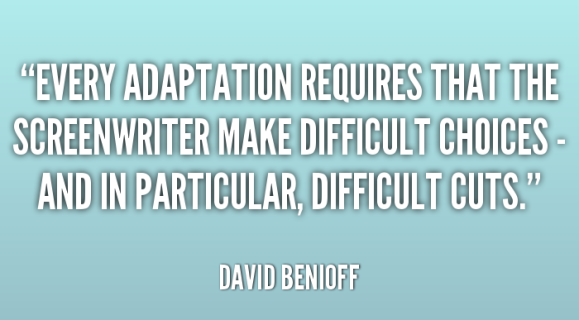 Think of it this way; when it comes to novels, there is one author (sometimes two) with one vision that can be interpreted in a hundred different ways by the readers. A film, on the other hand, has a massive team of people, each with his or her own ideas that have to gel together into a single interpretation of the story. Essentially, that is what a film adaptation is: one possible interpretation. Sometimes it works, sometimes it doesn’t.

Either way, I think it is safe to say that we will keep filling the cinema seats for years to come.

As I said earlier, part of this blog will be looking at books that have been adapted into films. If you have any favourites you think should be included, let me know. I’d be happy to include them if I can.

I'm a fledgling writer. My blog tracks my progress into the Literary World and I hope it is helpful to others looking to make a similar journey. I share tips and advice on writing and also share my love for books, films, and Science Fiction.
View all posts by RachFarrimond →
This entry was posted in Books -v- Film and tagged adaptation, Day Watch, fiction, Game of Thrones, iceberg, incandescent, Night Watch, Practical Magic, writing. Bookmark the permalink.