So. You’ve got the rights to a series of beloved children’s classics. You’ve already adapted two of the books into box-office smash-hit films. You have the beginnings of a rather successful and lucrative franchise. What do you do next?

Get cracking on film number three of course!

The Voyage of the Dawn Treader was the third Narnia book to be published and is the last story to be centred around the Pevensie children. Sadly, Peter and Susan are now too old to return to Narnia, but Edmund and Lucy have one last adventure with their old friends. Unfortunately for them, their tiresome cousin, Eustace Scrubb, has tagged along for the ride.

The book itself is quite different from the first two, insofar as the plot does not build up to a climactic battle. It is much more of an episodic, ‘road trip’, narrative, as the crew travels from island to island on their voyage to find the seven missing Lords. It is the kind of narrative that works very well for a short TV series.

But in terms of a family, Christmas blockbuster, studios tend to prefer more cohesive and progressive narratives. To that end, some changes had to be made. Unfortunately, it is a number of these changes that make this film the weakest of the series.

There is a part of me that, at times, wants to be a fly-on-the-wall in a production meeting, just to observe how certain decisions are made in the life of a film. In particular, I want to know how certain things were decided for Dawn Treader.

Firstly, there is the whole thing about the missing people. When the crew arrives at the Lone Islands, they discover that people are being rounded up and sent off in boats as tribute to some great evil that has taken up residence far out to sea.

Here’s my problem with this little addition: The crew of the Dawn Treader was already on a quest to find a bunch of missing people. They set out with the sole intention of finding the seven missing Telmarine Lords who served under Caspian’s father. What purpose does it serve to add in yet more missing people for them to find?

If the original purpose of the voyage had been simply to travel as far as they could for the fun of it, then, sure, add in some missing peasants for them to track down while they’re at it. But it was already a search and rescue mission, so why add another one into the mix?

Secondly, there is the whole thing about the swords. In the film each of the seven missing Lords had been given a sword that, when combined, become very powerful and are exactly what they need to defeat the bad mojo that is keeping all the people in boats prisoner. Now, I have no problem with the concept of magical swords, and actually having them collect the swords as they went was a handy visual cue to mark their progress throughout the film. But, ultimately, the use of the swords in their final battle somewhat negated the provision and protection that otherwise would have come from Aslan.

In the book (in all of the books in fact), help is always given when someone either acts in the name of Aslan or calls on the name of Aslan. Why, then, should that reliance now be transferred to a bunch of swords?

And then of course there’s t 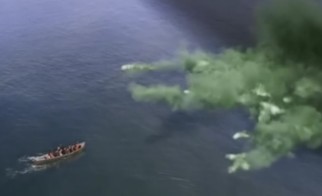 he fog. I mean, what says mortal peril better than evil green fog?

I will grant you that in the book, they do come to a dark, misty island that messes with their heads and makes them see all kinds of crazy things. And yes they do pick up Lord Roop at this point. But, they are not constantly followed by wisps of green fog that spring up every time they do something stupid. It is there when Caspian and Edmund fight over the water that turns everything to gold. It is there when Lucy takes the page from the Magician’s book containing the spell to make her beautiful.

Symbolically, it shows that evil can take any form, whether it is in someone’s personal shortcomings, or a physical adversary that needs to be fought off. I for one think that this concept comes across just fine in the book without the need for it to be visually represented. Granted, film is a visual medium, but even so there are more subtle ways that this could have been conveyed.

But enough of the negatives, because at the end of the day, the film is still a much closer adaptation than a lot of other books that have been made into films. The essence of the story is still there, even if it has been somewhat clouded in evil green fog.

The main beats from the book are there: the visit to the Lone Islands, Eustace’s time as a dragon, Deathwater Bay, the Dufflepuds, the Magician’s spell book, Ramandu’s Island – they are all still there and recognisable; it’s just that the order has changed and certain aspects have been expanded for dramatic effect.

Most notably for this is that Eustace spends a lot more time as a dragon than he does in the book. This works quite well as it enables the character to develop through the transformation before he is ultimately redeemed by Aslan. It also allows the friendship between him and Reepicheep to deepen. 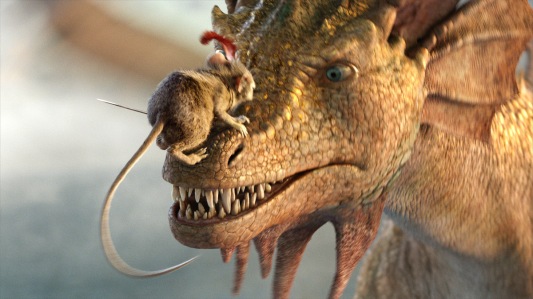 One of the things I particularly like about the CGI dragon of Eustace is his eyes. He retains his human eyes, perhaps implying that his humanity is still within and he is not an entirely lost cause.

Another highlight for me has to be the sequence in which Lucy uses the Magician’s spell to make herself more beautiful. In doing so, she becomes her sister, Susan, and ceases to exist herself. In the book, Lucy doesn’t actually recite the spell. She sees images (visions perhaps) of what will happen if she does say it, but Aslan stops her before she has a chance to go further.

At the start of the film, we find Lucy watching another girl receive the attention of boys around her age. Then, when she arrives in Narnia, one of the first things Caspian asks is how her sister is. He later comments that he is not married yet as no-one has caught his attention quite like Susan did (the second film built up a blossoming relationship between Susan and Caspian – see my previous post on Prince Caspian for more details).

In amongst all of that, Lucy is shown to be envious of her sister’s beauty. In the sequence where she recites the spell, she literally becomes Susan (as she is the measure of beauty by which Lucy judges herself). In doing so, Lucy wishes herself away and her brothers have no memory or experience of Narnia.

When Lucy finally snaps out of the vision, Aslan is there both to chide and to comfort her. He reminds her of the good she has achieved by simply being herself. It is a lesson that quite often doesn’t get through these days, particularly to young girls who are fed an ideal of beauty and body image by the media that is at best impossible to live up to and at worst is psychologically destructive.

The development of this aspect of the story is extremely well handled and, to a point, it justifies the additional character of Gael, the young girl who stows away on the Dawn Treader to be closer to her father after her mother is taken by the evil green fog. Lucy takes Gael under her wing throughout the film, leading to Gael telling her that when she grows up, she wants to be just like her. Lucy’s response is, “When you grow up, you should be just like you.” The delivery may edge a little on the cheesy side, but the sentiment behind it is genuine, which makes it bearable.

On the whole, I do enjoy the film, but it did take a couple of viewings for me to look past some of the more intrusive changes. Yes, I am talking about the evil green fog; can you tell I am not a fan of the fog?

But what I find most disappointing is that two of my favourite lines from the book didn’t make it into the film.

My best friend has a theory that Caspian was C. S. Lewis’ favourite character in the Narnia series. Certainly, when it comes to Dawn Treader, he does seem to get his pick of the best line. For instance, when they first encounter Eustace as a dragon, the book offers this exchange between Reepicheep and Caspian:

“With your Majesty’s leave –” began Reepicheep.

“No, Reepicheep,” the king said very firmly. “You are not to attempt a single combat with it.”

Then, of course, there is my all-time favourite literary pick-up line: In Chapter 13, upon meeting Ramandu’s daughter, Liliandil (the woman Caspian eventually marries), Caspian comes out with this:

“And what are we to do about the Sleepers?” asked Caspian. “In the world from which my friends come,” (here he nodded at Eustace and the Pevensies), “they have a story of a prince or a king coming to a castle where all the people lay in an enchanted sleep. In that story he could not dissolve the enchantment until he kissed the Princess.”

“But here,” said the girl, “it is different. Here, he cannot kiss the Princess until he has dissolved the enchantment.”

“Then,” said Caspian. “In the name of Aslan, show me how to set about that work at once.”

I don’t know about you, girls, but that would have worked on me! Especially if it came from Ben Barnes. Alas, it did not make the cut for the film. Perhaps the Producers were worried about giving Caspian/Ben Barnes that level of pulling-power. 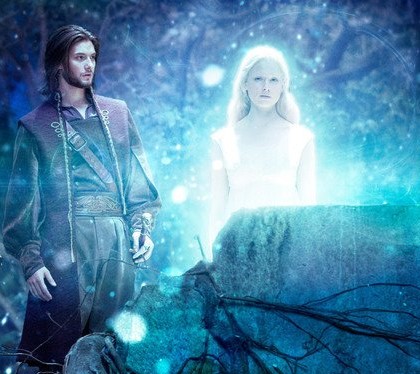 We may never know.

Overall, Dawn Treader may well have fallen quite a bit short of the expectations set by the first two films in the franchise, but it is still enjoyable and leaves the audience with plenty to think about. With the announcement earlier this year that The Silver Chair has been given the green light, I can only hope that the same level of care and attention is taken in its adaptation.

The Silver Chair is my favourite of the books and so I will no doubt be going into it with an extra-critical eye. In the meantime, the fact that there is more to look forward in the Narnia film franchise is enough to keep me going.

On an entirely unrelated subject, for those who have been reding The Eternity Mirrors, Part 6 was added at the weekend. Follow the links below to check it out if you haven’t already!