When we talk about writing novels, we talk a lot about structure, plot, character and themes, but not so much about writing good dialogue. At university, I studied for a BA English Literature with Creative Writing, and then went on to do an MA in Creative Writing, and I don’t recall ever having a lecture or seminar which focused on dialogue. Which is interesting, because whilst a novel needs a good plot, strong characters and central themes, it is the dialogue which shows us how the characters interact with each other and helps drive the plot and story forward.

I’m not sure I’ve ever come across a novel which lacks dialogue altogether. I’ve read many novels and short stories in particular which are light on dialogue and some short stories which eschew dialogue entirely but I genuinely cannot think of a single novel which doesn’t have at least a few lines of dialogue.

If anyone can think of one, I’d be interested to know.

Why is dialogue so important?

Well, imagine trying to get to know someone without talking to them. Is it possible? No, not really. We need to talk to each other to get to know each other, and there is very little in our lives that we can accomplish without communication, whether by spoken word, written word or sign-language.

When writing dialogue, we don’t want it to sound like a piece of genuine, real-life conversation. Why not? Well, listen carefully the next time you have a conversation with someone. How many times do they start and re-start a sentence? How often do they stop and stumble over what they’re saying? How many times do they say “um” and “ah” and “er”? What verbal ticks do they have, such as the tendency to say “like” and “basically” and “you know” every few words? How many sentences just run on and on? How many sentences are just fragments, not complete sentences at all?

Much of our own real-life dialogue is spontaneous, almost a stream of consciousness which we can’t rehearse or edit in the same way that we can the written word. Our natural dialogue is often fractured because it is, essentially, improvised, spoken as an answer or a reaction to what someone has just said to us or an incident that has just occurred.

When giving a speech, dialogue becomes rather more different, because it is prepared and rehearsed. With a good orator – for example, someone giving a speech or a comedian telling a story – it’s difficult to tell that they are reading from a script or from notes, or even memory – even though we know that they are – as the sound of their speech has a natural ebb and flow to it. Actors don’t make up dialogue as they go along, as a rule, and the dialogue in their film/show/play is carefully written and edited to sound like natural conversation, even though it isn’t.

Dialogue for a novel is the same. It needs to sound natural, even though it is anything but. We don’t include the verbal ticks and pauses, the “ums” and “ers” and “ahs” when we write dialogue (unless they serve a specific purpose) because reading real-life dialogue between real-life human beings is actually quite boring. If you don’t believe me, then trying transcribing a conversation between yourself and another one or two people. If written dialogue mimicked real dialogue, it would be tedious.

Interestingly, this is an issue which I have noticed recently due to my re-discovery of podcasts. A number of extremely promising podcasts have (in my opinion) fallen down as a consequence of poor, stilted, overlong or rambling dialogue, and it’s a pet-hate of mine. Nothing switches me off from a podcast or audio book faster than bad dialogue, even if the story and acting are good.

Written dialogue needs to flow smoothly, except where it doesn’t for narrative impact. As for when this is necessary, it’s something that can really only be done by instinct (more on this later).

One difficulty with writing dialogue is, rather than sounding a little too much like real-world dialogue, it ends up sounding stilted. I remember reading a book some years ago where I found the dialogue painfully stilted and wooden (I’ve forgotten the title, although I remember very clearly how poor the dialogue was). A conversation between two characters went something like this:

“If I find out that you have lied to me you will be sorry,” he said.

“You had better not be lying to me,” he said.

All of the dialogue was written like this. Read it out loud. Does it flow? Does it sound natural? Not to my ear it doesn’t. Now read this:

“You’d just better not be lying.”

Does that sound better? The use of contractions softens the dialogue and gives it a more natural flow. There’s also no need to indicate who is speaking every time, and not doing so speeds up the flow of dialogue and doesn’t interrupt the rhythm. Punctuation is also important and can be used to illustrate how a character is speaking and provide some indication as to their state of mind.

So, how do we write good dialogue that flows well? I have a couple of tips which work well for me, although they might not work well for everyone.

First of all, write what you want the characters to say. So far, so obvious.

CS Lewis once offered a young writer the following piece of advice:

“Always write (and read) with the ear, not the eye. You should hear every sentence you write as if it was being read aloud or spoken. If it does not sound nice, try again.”

This is excellent advice. Read your dialogue aloud, exactly as it appears on the page. It doesn’t have to be as if you’re giving a speech, just under your breath will be fine. If it sounds good, if it flows well, if you don’t stumble over it as you read it aloud, then you’re doing well. Give it tone and inflection, as if you’re voice-acting, and it’ll be easier to tell if it’s clunky or stilted.

When it comes to editing, cut out any dialogue that doesn’t serve a purpose. I often find that I end up with “filler” dialogue, which comes about in different ways. Sometimes I’m not sure where a conversation is going, so I just keep the characters talking until I figure it out, sometimes I want the characters to get to a specific point but am not sure how to get the conversation there, sometimes I address plot points in the dialogue which I later decide to cut out, and sometimes I just overwrite and repeat myself and my characters end up rambling.

As mentioned above, sometimes it is necessary write dialogue which doesn’t flow for a specific purpose, usually to underline a character’s emotional state. A character may be confused or distressed or inarticulate with anger, and this can be reflected in the structure of their dialogue, and in selective use of punctuation. Take, for example, this line of dialogue my novel Defiance:

The main character, Noah, is distressed and confused, shown in his fractured dialogue. Personally, I like to use an em-dash (which serves a different purpose to an en-dash or a hyphen, although they look similar) within dialogue or internal monologue to show the fracturing of dialogue due to emotional distress. I also use it to shown when a character has been interrupted, such as here:

A needle bites into the back of my arm.

In this scene, Noah is interrupted, first verbally by Flint, and secondly by another character, unnoticed by him until this point, who sticks a needle in his arm. Both times, Noah’s dialogue is cut off abruptly, as evidenced by the specific use of an em-dash.

I also like to use ellipses (…) to show when a character is trailing off and not finishing a thought due to uncertainty or are hesitating in what they want to say, such as here:

Here, one of the characters is attempting to apologise to Noah for a wrong done to him by her and is struggling to articulate herself. Her emotional state of guilt and misery, as opposed to anger, is shown with her trailing off, showing that she is hesitant and unsure of what to say to him.

I also happen to loath the use of capitals to indicate anger. I’m not sure why; I simply prefer to use italics and exclamation marks to indicate if a character is shouting or to place emphasis on certain words.

I’m not suggesting that anyone follows my personal rules for writing dialogue and use of punctuation to enhance the dialogue. Every writer needs to (and will) develop their own personal style and their own personal quirks. I know some who prefer hyphens or ellipses over em-dashes, others who prefer to use capitals over italics to show anger. What is important is honing a skill for good dialogue.

Bad dialogue doesn’t necessarily mean a bad story, or a bad writer, but it is an essential skill for a good writer. 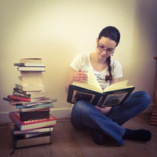 For more of Sarah Jayne Tanner’s work, check out her blog: Confessions of a Bookworm

IN A WORLD OF INJUSTICE, DEFIANCE IS THE ONLY OPTION.

Down in the city’s underbelly, Noah, a smart-mouthed combat fighter, has been sold against his will to Dream Scenarios, an exclusive organisation specialising in body-switching technology. Stripped of his freedom and forced to cater to the whims of the elite, Noah cannot resign himself to life as a puppet of Dream Scenarios and its wealthy clientele.