This is not a film that I watch consistently every year, but it is one that warms my heart each time it makes it way out of the DVD case. For those who have not seen this film (either the original 1947 flick, or the 1994 remake), be aware that SPOILERS will follow! 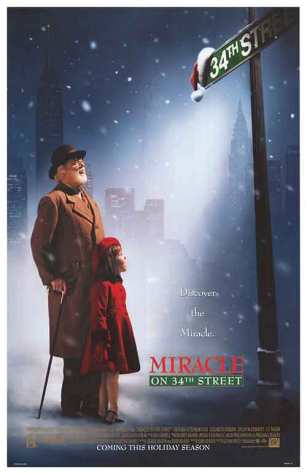 Miracle on 34th Street is about a cynical little girl who doesn’t believe in Santa Claus, but who makes friends with a kind old man who claims to be the big man himself. At first, she is sceptical, but as he is put on trial and tasked with proving who he is, she, along with the rest of the world, starts to believe.

It is one of the few films that I actually prefer the remake to the original. Usually (to me anyway), remakes feel like they are trying desperately to live up to the original’s reputation. And nine times out of ten, they manage to fall short. They either go for a filming-by-numbers approach and spend too long trying to hit the same story beats as their predecessor; or they go too far in the opposite direction and lose the story in the process.

Miracle doesn’t do this. The 1994 film is very similar to the 1947 original, yes, but manages to offer a smile-inducing twist towards the end that lifts the whole thing in a way that the original never achieved.

This twist comes in the resolution of the Court case.

In the 1947 film, the Court rules that Mr Kringle must be who he says he is because the US Postal Service redirects all of Santa’s mail to the Courthouse. There is a scene in the Post Depot in which the workers in the sorting room read about the case in the New York Times. They have a chuckle to themselves and conclude that if Santa is at the Courthouse, then they finally have somewhere to deliver all the Christmas letters that otherwise pile up in the corner; so they forward everything addressed to Santa to the Court. It is played off as a joke, but essentially leads to Mr Kringle’s exoneration when the Defence uses it to argue that if the US Postal Service say he is Santa, then it must be true.

In the 1994 remake, the film plays out pretty much in the same way right up until the Judge is about to issue his ruling in the case. At this point, there is no crate full of letters delivered. There is no sudden flash of magic from Mr Kringle, and for a moment the Judge looks very uneasy about what he is going to say next: his decision seemingly that Mr Kringle is mad and that there is in fact no Santa Claus.

But before he raises his gavel, Susan Walker (the little girl who was so serious and cynical about Christmas from the start, played beautifully here by Mara Wilson) approaches the bench and hands him a Christmas card. Inside the card is a dollar bill with some significant words circled on one side:

“In God We Trust”

He then tosses away the verdict he was about to give and explains if the US Treasury (backed by the Government and the People) can make a declaration of faith on the nation’s currency and not demand physical evidence or proof of God’s existence, then by a similar act of faith, he can declare that Santa Claus does exist and is in fact Mr Kringle.

It is the verdict that everyone in the Courtroom (apart from the prosecuting attorney – bah-humbug) was hoping for and much merriment and cheering ensues.

Now, don’t get me wrong, I am fully aware that this is a rather over sentimentalised portrayal of the US Judicial system. But it’s Christmas. We’re allowed to be sentimental at Christmas.

What makes this film special to me is the fact that a Court case (something that by its very nature relies on hard evidence and irrefutable proof) is settled by an act of faith – something that can, at times, be somewhat under appreciated in our society.

Thank goodness we have Christmas films around to remind us it’s OK just to believe.

So, what films warm your heart at this time of year? Leave a comment below with your favourites, or Tweet me @RachFarrimond to let me know!