Last week, I started looking at world building in fiction. This may seem like an arduous task, but if you are a Sci-Fi/Fantasy writer it is, to some extent, unavoidable. In last week’s post, I looked at the physical world, what will essentially be the foundation of your fictional creation, the places your characters will visit and travel through as part of your story. This week, we’re looking at the human world.

Who exactly do you envision will live in the world you have created? I am sure that by this stage you will have at least a handful of characters who will drive your plot, but they should not be the only people in your world. So, what is the general population like?

Now, I’m not expecting anyone to have detailed character profiles and backstories for thousands of nameless background characters, but there is quite a lot to be gained from giving the people(s) of your world a cultural grounding.

Here are a few jumping-off points for you to consider:

I touched on this last week when talking about building your physical world (don’t worry, I don’t have another forty different ways to describe rain), but it does bear re-iterating. Climate and landscape really can have an effect on a particular culture.

When my parents were preparing to move to Malawi in Africa a few years ago, they were introduced to the concept of ‘Hot Country Culture’ verses ‘Cold Country Culture’. As you may be able to guess, the UK is a Cold Country (not as cold as some, but still pretty chilly at certain times of the year). This cold climate is reflected in British culture.

Typically, a Cold Country Culture identifies as being task oriented. We are very much driven by meeting deadlines. If we arrange to meet up with friends, a date and time will be set, and woe betide anyone who has the audacity to show up late! Of course, there are some people who are more laid back about this than others, but in general this is how we have been socially programmed.

A Hot Country Culture, on the other hand, like Malawi, is more relationally oriented. This means that dates and times don’t matter in quite the same way, and the emphasis is on a person’s relationship with others instead. In a Malawian meeting, for example, the first order of business is not to start the meeting on the stroke of whichever hour it has been arranged for, but to first greet each person gathered and find out how they are, how their families are, in much more detail than we would usually go into here in the UK.

At the church my parents attend just outside of Blantyre, they have a custom of everyone in the congregation shaking hands with everyone else at the end of the service. This leads to a great long processional line outside the church as everyone makes their way round and greets one another. At my church here in Newcastle, we may stay after the service for a cup of coffee and a chat, but at the back of our minds in the fact that lunchtime is approaching, and we need to be moving on to the next task in our day.

These may be fairly simplified examples of this concept, and if you want to read up on studies that have been made of Hot and Cold County Cultures, have a look at the link below. Maybe you will find something there that resonates with you for your story.

Again, I am not expecting anyone to chronicle thousands of years’ worth of fictional history (unless you want to; you know, it could be fun), but having an understanding of a few key events and how they have shaped your fictional society is important. Certain events may have led to certain traditions or festivals that can be drawn upon within your narrative.

By way of example, in my current work-in-progress, The Green Stone In The Fire, there is a festival called the Feast of Candles. It is similar to Christmas and is celebrated in the middle of winter, at the darkest and coldest point in the year.

When the festival first developed, it was a celebration of peace and a time for the neighbouring kingdoms to join together for feasting and fun. However, thanks to Thane and certain events that I won’t go into here, the feast in latter years took on a more sombre tone, with people gathering together for mutual support and remembrance. This is when the Candles Eve Feast grew in prominence. Held the night before the main festivities began, the Candles Eve Feast was a time for families to say goodbye to their loved ones before they were taken as tribute to Thane. As part of the feast, the Blessing of the Candles developed – a ‘prayer’ that was either said or sung as the ceremonial candles were lit.

Now, the specifics of the Feast of Candles and the celebrations associated with it are not entirely relevant to the novel as a whole. They do not have any great bearing on the plot, other than to provide a backdrop for a few early events. But having worked out the details of this tradition, I better understand the people of Aurelia’s world (and Aurelia herself). It has also given me plenty of material to work into a prequel novella, and that is always a bonus!

We all know that variety is the spice of life, and more importantly that no culture on earth is entirely untouched by others. That, of course, means that the same should be true of any fictional culture you may dream up. 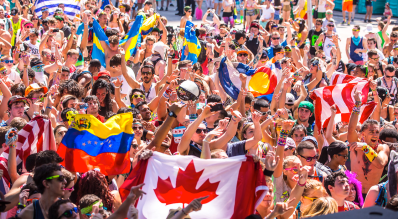 As you plan and flesh out the people of your world, bear in mind who their neighbours are. Do they get along with the surrounding tribes, kingdoms, or cities  countries? Have they ever gone to war with any of them? Has that left them irreparably changed?

How about ethnic diversity? Is this place a melting pot for several cultures, race of people groups to converge?

Quite simply, when it comes to diversity, the possibilities are limitless.

As I am talking mainly from a Sci-Fi/Fantasy perspective, there is also the added vestige of different magical beings or alien species that you may be thinking of adding in as well. Remember, each of them will have their own cultural background and identity that will need fleshing out as well!

If all of this seems a little overwhelming, keep in mind that there are plenty of sources that you can draw on.

Every country on earth has its own culture and mythology that can be researched and used as a stepping off point for your own fictional worlds. Of course, this should be approached with a great deal of care and sensitivity, especially if the culture you are drawing on is not your own and is therefore unfamiliar to you. No matter how much research you do, it is always advisable to ask someone to read over your work, with an eye of cultural awareness to ensure that the references you have used are not misappropriated.

Having said this, I would not discourage anyone from exploring the cultural tapestry of our world for inspiration. After all, we have the most rich and diverse planet in the universe (that we know of, at least), and the more we understand it ourselves, the better. And the better our writing will be for it.

When establishing the culture(s) of your new world, keep in mind that at the end of the day, you want your world (and its people) to be believable and relatable in the eyes of your readers. Grounding your fictional culture in an existing one can go a long way to doing this; as can understanding how the landscape or history have shaped it.

For more information on Hot and Cold Climate Cultures: