As a writer, I want each word I put down on paper to have meaning and purpose. I want each one of them to make readers feel and think and yearn to read on. As such, there is one particular phrase that makes me cringe:

“No!” I want to say in response. “That will NOT do at all. Not now. Not ever! There are at least fifty other ways I could have phrased that and each of them are better than what is currently staring at me from the page!”

Quick show of hands: Who has ever said that (or something similar) to themselves during the first draft?

For me, this mindset is what largely contributed to a long stretch of writer’s block. And it wasn’t until I gave myself the freedom to be less than perfect in my writing that I started up again. After all, I’m not perfect in any other area of my life; why should writing be any different?

I have read some amazing books over the years. It didn’t occur to me for a long time that these books did not spring into the world fully formed in their completed state. Someone (a writer whom I held in high regard, no doubt) spent an untold number of hours getting it down on paper and then even more time editing it – deleting whole swathes of text, swapping sentences and paragraphs, grappling over a single word until they found the perfect one.

If you’re currently struggling to get through the first draft of your project, let me tell you now you are not the only one! In fact, writers have wrestled with First Drafts for many years and have come up with countless quotes and sound bites to help others in their struggle.

Here are a few that have spoken to me along the way:

Now, usually, I would be inclined to take each of these quotes separately and give you insights into why I find them useful and how they informed my own writing.

But really, they all boil down to one thing:

First drafts are hard. They can seem daunting and challenging on their own, without the added pressure of trying to make them perfect at the same time. So, take the pressure off. There is one time when it is absolutely acceptable for a writer to say, “That’ll do for now,” and that is during the first draft stage. 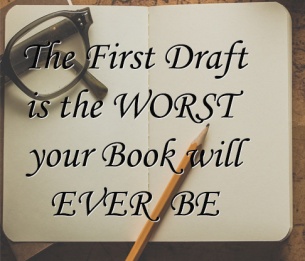 Stop beating yourself up when you’re not happy with a particular sentence or passage in your first draft. Let it lie for a while. Get the rest of the draft done before you start scrutinising each line. You never know, when you do come back to it, you may find that, like wine, it has improved with age.

Remember, when it comes to your first draft, it really is better to say anything, rather than nothing.

Stunning installation ar Hexham Abbey - 4,500 paper angels to remember those in the area affected by the pandemic.
Celebrating mum and dad's Ruby Wedding Anniversary (40 years) in style! The actually Anniversary is tomorrow, but we've started early 😉
Utterly stunning evening at Tynemouth. Made up for being in an office all day! 😎Roll on the weekend and a week off!!!
I may be a little bit hooked 🙂 Rose, Lavender, and Lemon so far. #CandleMaking #NewHobby
Just because lockdown is ending doesn't mean we can't have fun with new hobbies. My kitchen now smells like roses 🌹😍 I'll let you know how they turn out tomorrow. #CandleMaking #NewHobby #ThisIsWhatDaysOffAreFor
An absolutely freezing Birthday walk through the Dene today. Thank goodness the cafe was open and well stocked with Hot Chocolate #friendsofjesmonddene #birthdaywalk #abitchilly❄️